I spent a few years of my early working life in the motor industry here in Melbourne Australia.

I remember back in the 80’s when the government of the day introduced changes which at the time appeared tough, but now in 2013 I can see why, the measures were aimed at protecting our local automotive industry.

Without going into detail of the changes, the measures included reducing the automotive industry to 3 or 4 main makers, Holden, Ford, Toyota and Mitsubishi.  These four were selected because they produced cars in this country.

The other makers that did not support Australia or the local industry were locked out.  Taxes on the sale price of the cars was increased and they were told to compete off shore.  Remember, we’re not just talking about the jobs of workers making the cars, there is the associated industries like dealerships, mechanics, parts salesman, cleaners and all the people who feed those people.

Foreign made cars do little for Australian’s other than allowing them to drive exotic cars.  The cars themselves are not any more econimical, safer or any other reason other than ‘brand’.  Some of these foreign makers have sales outlets, but not full-blown dealerships supporting the cars.  Other than the initial sale, the money invested in these cars is heading in one direction… overseas.

People and makers in 2013 that wish to buy and drive cars not made in this country are to blame for companies like Ford moving off-shore.  Would you rather be selfish and drive that European car in preference to supporting local jobs, and we’re talking thousands of jobs.

If those European cars were still taxed, that money could be reinvested to support the local automotive industry in tough times.

We’re not just talking about jobs at Ford, there are the thousands of associated industries including parts, accessories, services not forgetting all the businesses that then support the thousands of jobs.

I am angry about this because we have been selfish and it has cost the jobs of thousands of Australians.  Australian’s have not supported their fellow Australian’s which is something I thought we did… look after the next bloke.  The govenment hasn’t helped either.  Bailouts, subsidies and other incentives were better than spending millions on the dole.

Oh, just in case.. we drive a locally made Holden Cruze!

This very sad headline in TheAge says it all.. End of an era 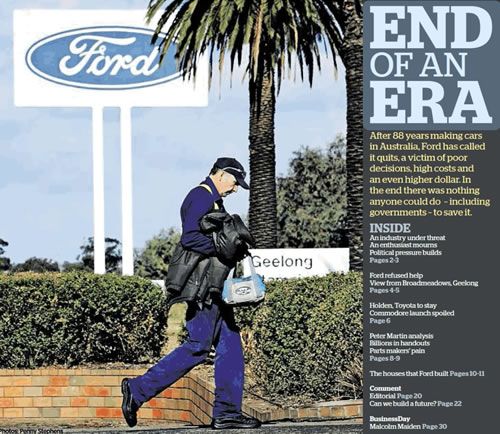 The decision comes as Ford revealed fresh losses of $141 million and as the ACTU warned of up to 10,000 jobs being shed across the industry. The iconic Falcon brand will cease to exist.

Australian Manufacturing Workers Union national secretary Paul Bastian said the government should consider measures to boost the industry such as lifting tariffs and devaluing the currency, as Japan had done.

‘‘ We’ve always maintained there’s no such thing as free trade and you never geta better example of that than in the auto sector,’’ he said.

‘‘ We play by a set of rules that no other country plays by.’’

Trade Minister Craig Emerson’s spokesperson said the government was not considering increasing tariffs on motor vehicles and pointed out that the dollar had fallen over the past few weeks.

The move is a further blow to Geelong, with Shell’s refinery likely to close and Alcoa’s Point Henry aluminium smelter facing an uncertain future.

Mr Graziano said costs in Australia were too high and conceded that ashift away from large cars by consumers had hurt Ford. ‘‘ Our cost structure remained uncompetitive … [it is] double that of Europe and nearly four times that of Ford in Asia,’’ he said. Even if Ford slashed wages and received even larger subsidies, ‘‘ the business case did not stack up’’ .

Over the past decade Ford has received $1.1 billion from taxpayers while Holden has received nearly double that. Toyota has not revealed the subsidies it has received . Yet during that time Falcon sales have plunged nearly 75 per cent to 14,026 as the high dollar helped to make imported cars cheaper.

Former Nissan Australia head Ivan Deveson, who was also with General Motors for 32 years, said he did not support lifting tariffs but Australia had to ‘‘ look at the unlevel playing field’’ . He said Ford’s closure put the other car makers at risk.

‘‘ It may not be the final blow but it certainly jeopardises the efficiency of the local suppliers and their ability to maintain costs for the remaining two,’’ he said.

Prime Minister Julia Gillard downplayed the threat of the other car makers leaving and said Ford would continue to receive $34 million in government subsidies to allow new models of the Falcon and Territory to roll off the production line until 2016.

She said the industry had survived the departure of Mitsubishi and would survive that of Ford. ‘‘ It’s not easy days in manufacturing . The strength of the Australian dollar obviously bears down on Australian manufacturing,’’ she said.

Car parts suppliers are likely to be badly hit, and Ms Gillard said her government would provide an extra $10 million to them, with the Victorian government chipping in $2 million. Almost $40 million in federal and state money will go to programs to help Geelong and northern Melbourne adjust.

Opposition Leader Tony Abbott said it was a ‘‘ black day for Australian manufacturing’ ’ and attacked the government’s policies, including the carbon tax.

‘‘ Obviously anything that adds to the cost of manufacturing in Australia is something that we don’t need at a time like this, and the carbon tax is one of those things,’’ he said.

Premier Denis Napthine said the state would help people who lost their jobs and agreed that the carbon tax was hurting manufacturing . But Ford’s Mr Graziano was careful not to blame the carbon tax when asked, saying there was ‘‘ no single factor’ ’ for the decision.

Stewart Harris, who has worked on the Broadmeadows line for 23 years, said he was in shock. ‘‘‘ It’s not easy to absorb something like this,’’ he said.

But a worker at Ford’s Geelong plant for 12 years, Jason Andrew, was not surprised. ‘‘ We knew it was coming,’’ he said, blaming high petrol prices, the federal government and imported cars.

The ACTU called for urgent talks between governments, car maker and unions.

With Shane Green and Benjamin Priess