We do love a clever headline, and this fits the bill perfectly..

Following another fantastic run and win by Black Caviar.

This run and win at Flemington in the Black Caviar Lightning Day Stakes is 23 consecutive WINS (no losses).

Not bad for a mare from Melbourne?

All rise for the mare

On a sultry Flemington afternoon, mighty Black Caviar made it 23 from 23 by winning a race now named in her honour, beating two stablemates and breaking a course record that had stood for 25 years without breaking her preternaturally long stride. The time was 55:42; never ask Black Caviar to wait a minute. Royal Ascot, her last and hairiest win, seemed far away, though not in the mind of jockey Luke Nolen. ‘‘Didn’t drop me hands on her today,’’ he said, by way of half-challenge.

In the crush of connections and emotions in the mounting yard, the laconic Queenslander in trainer Peter Moody re-emerged. ‘‘Imagine having something this good, and sharing it with every bugger in Australia!’’ he said.

This was the Black Caviar Lightning Stakes, but really, it was Black Caviar Flemington, Black Caviar time. Flemington sparkled in its florals, but also in the now famous salmon-and-black motif. Along the lawn wended an avenue of honour, each post what Caviar has made it, a winner. Its effect was to act as a reminder that no one win in the streak was a guarantee of another; all had to be won.

For the first, nearly four years ago, she had an apprentice jockey and started at $3. She has never been better than odds-on since.

Flemington had a plinth ready for win No. 23. About any other horse, all these props would be tempting fate, but Black Caviar IS fate, and every other horse’s fate; ask Moody, who said he thought runner-up Moment of Change was an ‘‘outstanding’’ horse. Henceforth, second to Black Caviar is a bloodline in itself.

Black Caviar drew a crowd even to the stalls, prepared to sweat it out for a glimpse. In the breathless heat there, she seemed more agitated than usual. Her head lolled, her tail swished, but so did everyone else’s, inwardly. She also seemed to KNOW. While other horses looked blankly and blinkeredly ahead, she turned frequently towards the crowd, watching them watching her, and at one point veered playfully towards a television reporter. You would have sworn that if she could wink, she would have.

Truth be told, there was in the Moody camp a hint of trepidation this day. Black Caviar’s last start was her nearly not so excellent English adventure in June last year. ‘‘I said to my girls, I think it’s the first time I’ve been nervous for a long time,’’ he said. ‘‘I suppose its been seven months wait.’’ Ascot played on Nolen’s mind, too, like a blowfly that he cannot swat away.

But that was half a world and half a year away, and she was injured then. Since, two Black Caviar books have emerged, and, you imagine, film rights set in train. Her legend was burnished; now it was time to outstrip it.

Further truth be told, there is not much to be told about Black Caviar’s races other than a plain truth. The course was flat and dead straight, so tactical intrigue was minimal. A worthy, but acquiescent field jogged alongside and then trailed off. The ‘‘sectionals’’, so beloved of racing aficionados, rolled by under her hooves as if she was on rollers.

Nolen honoured what he has always said was his first and greatest obligation: he held on. ‘‘I gave her a squeeze because I didn’t want her becoming too complacent,’’ he said. ‘‘I copped too much of a kick in the arse for it at Ascot, so I just shook the reins a little bit and made sure she ran through to the line.’’

The course broadcast was drowned out by the crescendo, but was superfluous anyway. The naked eye was plenty enough to behold history. Black Caviar paraded briefly, then was whisked away for a wash and a watering. Moody, ever the racing man, went first to the jockeys and connections of the placegetters, for they were also his. But the cynosure was plain for all to see.

‘‘You’re on odds of a hiding to nothing to bring her back,’’ Moody said. ‘‘The job was done. We thought it was over. But to come back, do that and run a record, you know, crikey, I’m lost for words. I’m glad I’m sweating, or you might see a tear.’’ 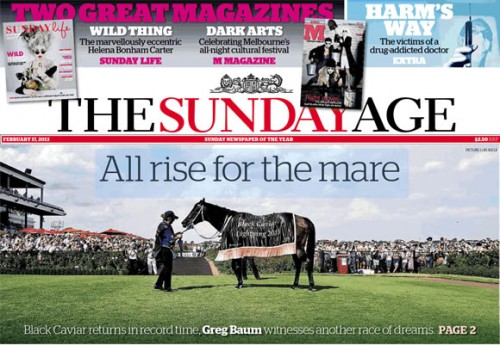