I’ve been banging on about sourdough bread sold by Coles and Woolworths is simply not what it is labelled.

It is NOT sourdough bread

As far back as 2013, alarms have been raised by Australian media, publishers, health groups and retail organisations (Choice).

How is it possible that retailers can sell a product that is not what it’s labelled?

Adding a flavouring (sour) does not turn bread into sourdough bread

Both Coles and Woolworths labelling states that less than 25% of the product is sourdough.  We have been unable to establish what 25% means.

For a product to be sold as genuine sourdough bread, the dough must be cultured / fermented over a 24-36 hour period.  This process considerably changes the dough and the resulting bread.

Bakers across Australia are calling for the definition of sourdough to be regulated, as it is in France, saying it is unfair that major supermarkets and bakeries sell an inferior bread at the same price. 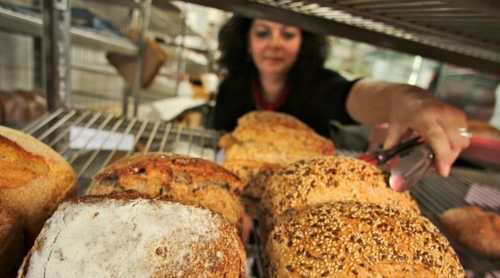 Consumers are being misled by Woolworths, Coles and bakeries that label their bread as ”sourdough” despite it being little more than sour-flavoured white bread, artisan bread makers say.

A traditional sourdough loaf should only contain only flour, salt and water, and the mixture left to ferment and rise for at least eight hours, as yeast naturally forms, resulting in a healthier bread.

Sandra Cucuzza of Fatto a Mano Organic Bakery in Fitzroy says the process is ”hugely labour intensive” while the mixture is carefully watched overnight, or even for two days, until it is ready to be baked.

But supermarkets and bakeries are cashing in on the artisan bread phenomenon, selling white bread that has been pre-mixed with citric acid and yeast as ”sourdough” for premium prices.

A ”traditional sourdough” loaf from Woolworths, that contains yeast and ”sourdough culture” costs $5.25, and a Coles Bakery ”baguette white sourdough” costs $4. Bakers across Australia are calling for the definition of sourdough to be regulated, as it is in France, saying it is unfair that major supermarkets and bakeries sell an inferior bread at the same price.

A sourdough loaf at Fatto a Mano is $6.50, but Ms Cucuzza points out that her sourdough contains only unbleached flour and water that’s been fermented, and sea salt, and that the fermented base was actually started 11 years ago by the previous owners.

”The idea is you keep a piece of that original dough and mix it with fresh flour and ferment it overnight or for two days. Ours is 11 years old. The bakers that were here before us left their starter, and we’ve been here seven years.”

Ms Cucuzza sells about 140 loaves of sourdough a day. ”We have a lot of restaurants and cafes that use bread. It’s well loved. We have people that come from the country. They say they don’t want to eat the rubbish from the supermarket.”

A ban on inferior sourdough ”would clean a lot of things up”, said award-winning baker Brett Noy.

”A lot of artisan bakers hate that the major supermarkets and local bakeries are jumping in on that marketing bandwagon to achieve sales.”

This is not the first time labels and false claims have been used to entice customers. Fairfax Media found ”freshly cut flowers” in both Coles and Woolworths were imported from Kenya and Colombia; French-grown citrus fruits sit under an ”Australian grown” sign in Coles, and ”freshly baked bread” was coming from Ireland, Germany and Denmark.

When Holly Berry, of Bungendore, discovered her Woolworths sourdough loaf contained commercial yeast she wrote an email to complain. The company’s response was revealing.

”All sourdough contains yeast,” wrote a Woolworths spokeswoman in an email.

”It’s just the yeast in sourdough are wild and are of a different species than commercially available yeast. There are also no laws on what constitutes a sourdough. There is a very small percentage of commercial yeast that is added to get the consistency of size and shape required by the retail consumer.”

Artisan bakers disagree with the Woolworths definition of sourdough.

”Look at the ingredients,” Mr Noy said. ”If it has more than flour, salt and water, then it is not a true sourdough.”

Master baker at Sydney’s Bourke Street Bakery, Paul Giddings, who has been baking sourdough for 8½ years, said his sourdough took up to 17 hours to cook as the wheat fermented to create the culture that gave the sour taste.

”I can recognise when I go into a bakery who is making what I consider to be sourdough bread because I know the amount of work that has gone into it,” he said.

With demand for sourdough on the rise consumers need to know that not all sourdough is the same, said Tom Godfrey, spokesman for consumer watchdog Choice. ”Before considering paying a premium for sourdough, ask the baker if the recipe is authentic and doesn’t contain powdered yeast,” he said.

Woolworths spokeswoman Siobhan Quinn did not respond in time to Fairfax Media’s queries.

Who do we lobby?

Along with other products that are sold until false pretense

Isn’t it logical?… if the product does not contain 75+% of the core ingredient, then it cannot mislead buyers by being sold as the product.